In a recent maintenance Chicago Mayor Lori Lightfoot appeared to acknowledge the reality of Chicago crime, with a reported admission of growing problems downtown. But she really wasn’t.

Indeed, as always this year, she pointed out that murders and shootings have so far been somewhat down from last year. Murders and shootings are 16% and 18% lower, respectively, than in 2021, as of the end of last week. Yet this claim is still misleading because last year is not the right comparison. 2021 was the worst for Chicago murders in 25 years. The best measure for major crimes like murders and shootings and everything else is relative to the last pre-Covid, pre-George Floyd year of 2019.

Using that yardstick, Chicago 2022 isn’t looking good. Using 2021 as a comparison to 2022 is an attempt to fish out numbers — any numbers — that distract from the Lightfoot administration’s failure to make Chicago’s streets safer since everything went south. in 2020.

Politicizing the benchmark comparison year isn’t the only way to downplay the volume of crime in Chicago. The second is the failure to note how many crimes nationwide — and certainly in Chicago — go unreported to police by victims. That’s a lot, according to data from the US Bureau of Justice Statistics.

The third way crime is statistically understated in Chicago is that some important crime categories are simply not included in the police department’s popular weekly Compstat “Part 1” crime summaries on which the mayor, superintendent and media rely so heavily. That will change with an emerging, FBI-mandated alternative called the National Incident Based Reporting System, or NIBRS. In addition, the NIBRS will fix another current flaw: when multiple crimes are reported in an incident, only the most serious is counted.

Conclusion: Undercounting crime in Chicago and other cities often falls into the category of “unknown unknowns.” We don’t even know what we are missing, and how come we are missing it.

At a time when legitimate and deep community concerns about crime in and around Chicago are growing, it is essential to be wary of problems in the reporting system that artificially understate the full extent of the actual crime that occurs. It’s not usually a concern for politicians, of course, but it should be for the media.

For the City Hall’s current most-hyped crime-reporting tool, Compstat’s “Part 1” major crime summaries, the best baseline year to use is 2019. carjackings, car thefts, etc. By comparing this year to date from 2022 to 2019 rather than Lightfoot’s preferred baseline year of 2021, we can see how high some crime levels remain.

Citywide data from the Chicago Police Department shows that compared to 2019, Week 32 Chicago murders for 2022 were up 31% and shootings were up 33%. That’s a far cry from the 2022-21 comparisons that Lightfoot and his Superintendent of Police David Brown continued to accentuate: down 16% and down 18% at the end of week 32, respectively. 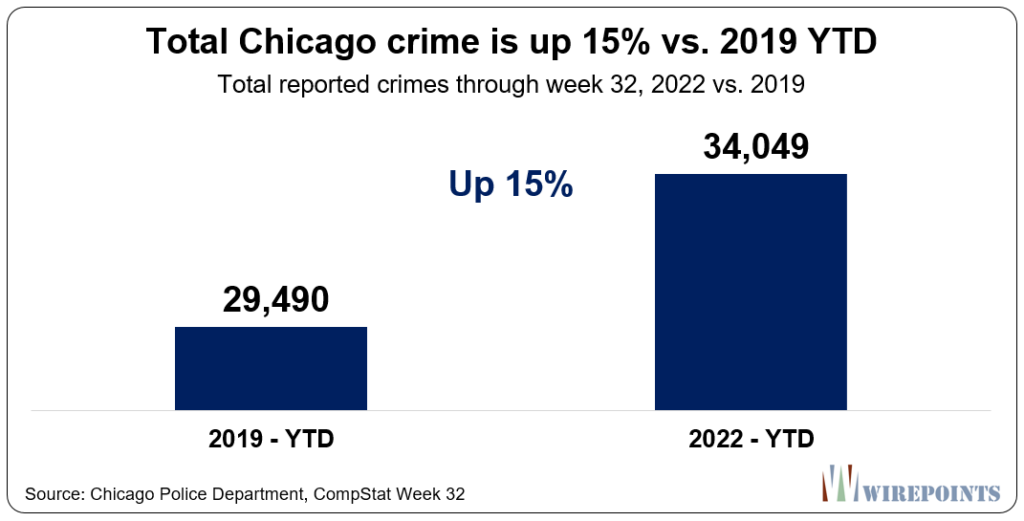 The victims are silent, the crime is not reported

Not only are Lightfoot and Brown using the wrong base year to assess Chicago’s crime problem in 2022, they and many news outlets also fail to note how much crime goes unreported.

It is well known that many victims of crime remain silent and never report their victimization. According to the United States Bureau of Justice Statistics latest criminal victimization report released in 2020, nationally only 40% of non-murder violent victimizations and only 33% of property victimizations are reported to police.

Victims of crime are also witnesses to crime. And in Chicago they cannot fail to notice what happens to witnesses who speak. Stilland Againand Again, some pay the ultimate price. As a result, many crime victims do not report anything to Chicago.

Also, victimizations since 2020 by violent criminals from car driversof CTA endorsements and now even police – is striking. Things seem to be going off the rails. As a result, more victims might choose to compress it.

Others resort to armed self-defense; on the call to action two different times recently with knives and in Woodlawn with a gun against a member of a car theft squad who police say drew his gun first. Potential criminals are injured or killed while potential victims fight back. This shows that trust in the system is eroding, as is – more than in the past – perhaps the propensity to report crimes.

Chicago crime victims may also be increasingly less likely to report a crime due to the time it takes for overstretched police to get to the scene for a priority 911 call. As we reportedthis problem has reached a new level in 2021. After waiting an hour or two on a previous occasion, victims of new crimes can simply cash in and move on without reporting the crime against them, at all.

But the new NIBRS 2021 crime reporting format makes it clear that other important categories are excluded from the “Part 1” summaries. All local law enforcement agencies are under increasing pressure from the FBI to adopt the NIBRS. Decatur, Illinois is slightly ahead of the curve. Decatur’s 2021 NIBRS Crime Summary shows how the new system includes a range of crime categories not included in the “Part 1” summaries now favored by Chicago.

Yes, some of these hitherto “hidden” categories are relatively minor. But some are not – like abductions; common assault; intimidation; criminal fire; and destruction, damage and vandalism of property. Particularly left out in Chicago “Part 1” Major Crime Summaries but required under the NIBRS are violations of the Arms Act. Chicago and Cook County are teeming with them and increasingly, convicted or charged violators of gun laws are being charged again with violent crimes.

So that’s another way total crime has been underestimated in Chicago and other cities that continue to accentuate part 1 summaries. In case you were wondering, Chicago started the process conversion to NIBRS, but the road has been bumpy so far.

Chicago only managed to report 7 months of NIBRS, or FBI Expanded Crime Data for 2021. Other cities also have difficulty implementing NIBRS reporting, often due to software issues. Still, it comes. And it will force police departments across the country to include categories of crimes that aren’t currently highlighted in public communications.

Other undercounts are due to the current “hierarchy rule”

Additionally, and quite significantly, NIBRS will remove the current crime “hierarchy rule” used to report major “Part 1” incidents. This rule has meant for decades that when various Alleged crimes are committed by one perpetrator at the same time, only the most serious crime is counted. So if a robbery, rape, and murder occur in the same attack, only the murder is counted. Just over 1 in 10 reported criminal incidents involve multiple crimes, reports the FBI. And therefore a number of unreported “lesser” infractions. Under NIBRS, everything will be counted. The NIBRS will also include extended data on the weapons useddata which, at the city level, will be particularly useful.

The big takeaway? Despite a comprehensive Chicago crime database which is hard to use for all but the most data-savvy – the “official” crime numbers in Chicago and most other cities are never quite what they seem. They represent low estimates. This is a problem, and one that politicians, the media and the public should be much more aware of.

Going forward, unreported crime will still remain high, but could well increase, especially in cities like Chicago where crime has continued to rise since 2019, as well as fears of retaliation for good citizens inclined to report crimes. they suffered or witnessed. The BJS should consider city-specific surveys of unreported crime in major cities like Chicago to test for variance with national estimates of the problem.

Meanwhile, with increasing deployment to law enforcement nationwide, the NIBRS will begin to partially correct crime counts, at least.

For now though, until cities complete the move to NIBRS, it is important that mayors, police chiefs and the media more consistently use the best base year for current calculations of population growth. crime. This is the year before the start of the Great Decryption: 2019.