If you’re planning to visit Hartford and have any doubts about the city’s safety, we’ve got you covered.

We’ll dig deeper into crime rates, crime stats, crime maps, crime graphs, and talk to locals to give you a better understanding of how safe Hartford really is.

What is the crime rate in Hartford, CT?

Hartford’s violent crime rate of 635.31 is similar to Seattle, Atlanta and Los Angeles.

You have a 1 in 157 chance of being a victim of a violent crime in Hartford.

Here is a graph showing the evolution of violent crime over the past 12 years in Hartford:

Violent crime in Hartford has been steadily declining since 2018. 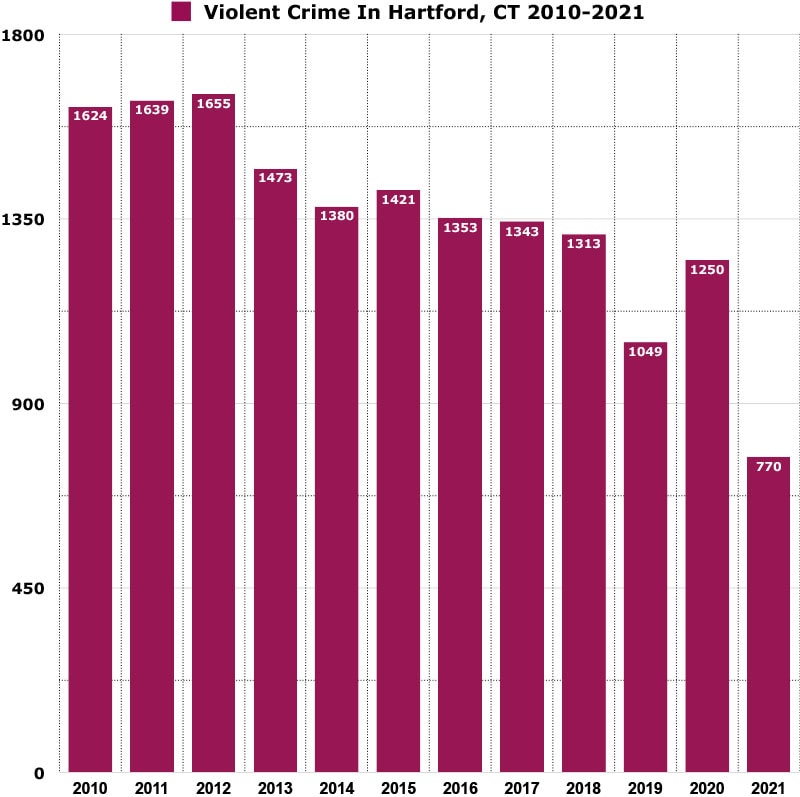 * Violent crimes include; homicides, rapes, robberies and aggravated assaults and the violent crime rate is calculated by dividing the number of reported crimes by the total population; the result is multiplied by 100,000.

Year after year, murders have increased by 36%.

Hartford’s murder rate is similar to cities like Washington DC, Cincinnati and Philadelphia.

Here is a graph illustrating the evolution of homicides over the past 12 years in Hartford:

The killing is at its highest level in 12 years. Hartford’s deadliest year was 1995 when there was 55 murders reported. 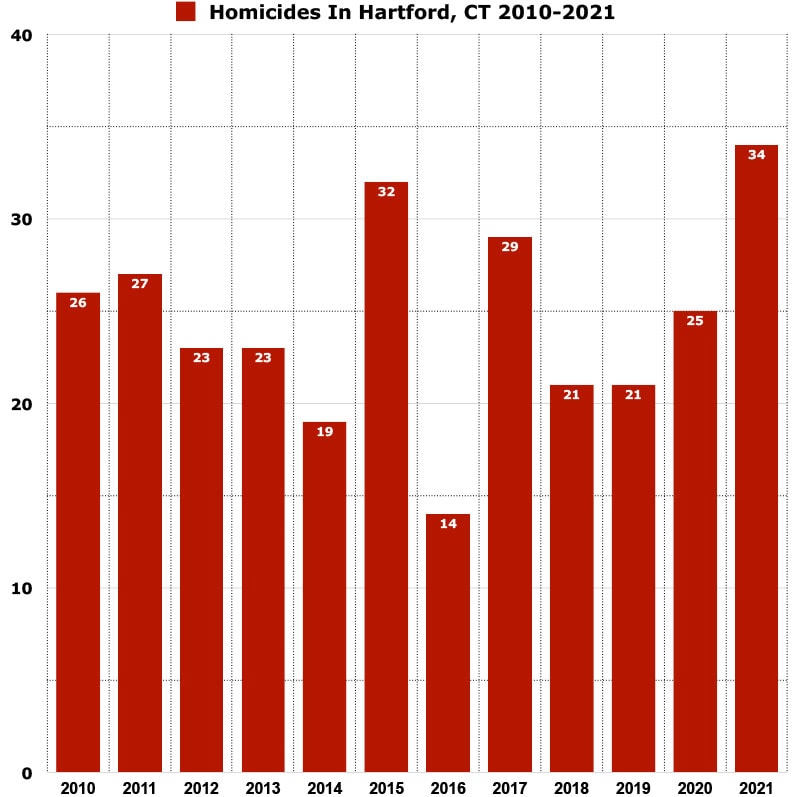 Year over year, property crime in Hartford decreased by 15.6%.

Hartford’s property crime rate of 2,572.61 is similar to Newark, San Jose and Sacramento.

You have a 1 in 36 chance of being a victim of property crime in Hartford.

Here is a graph showing the evolution of violent crime over the past 12 years in Hartford:

Property crime in Hartford has steadily declined over the past 12 years. 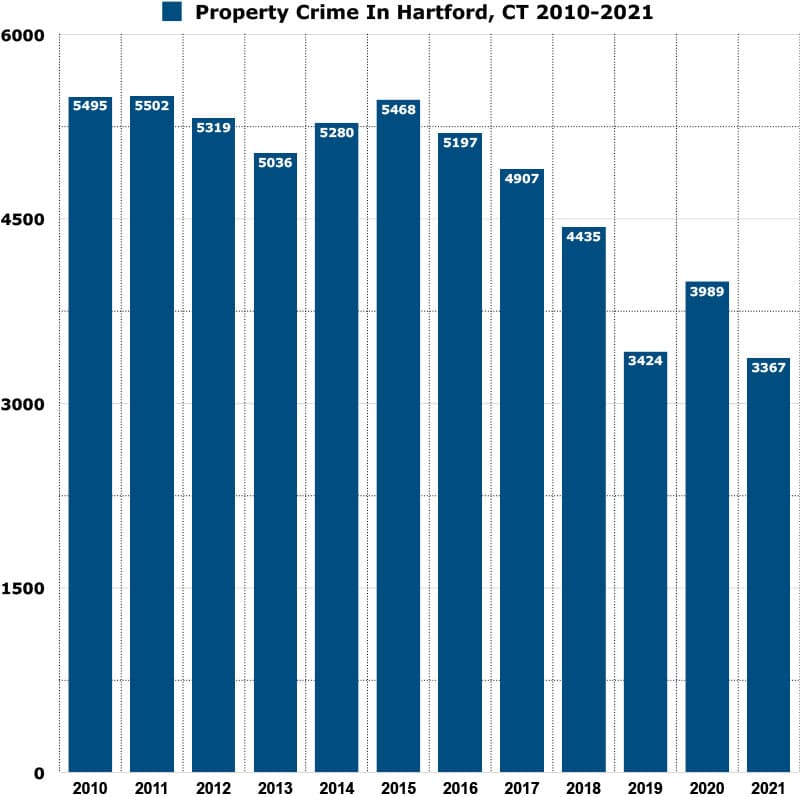 * Property crimes include; the rate of burglary, larceny/theft, motor vehicle theft, arson and property crimes is calculated by dividing the number of reported crimes by the total population; the result is multiplied by 100,000.

How are Hartford’s crime rates calculated?

The crime rate is calculated by dividing the number of reported crimes by the total population; the result is multiplied by 100,000.

Here’s how Hartford’s crime rate compares to other cities in Connecticut. As of 2020, Hartford has the highest crime rate of any listed city.

Hartford, CT vs the most dangerous cities in the United States (2020 crime rate) 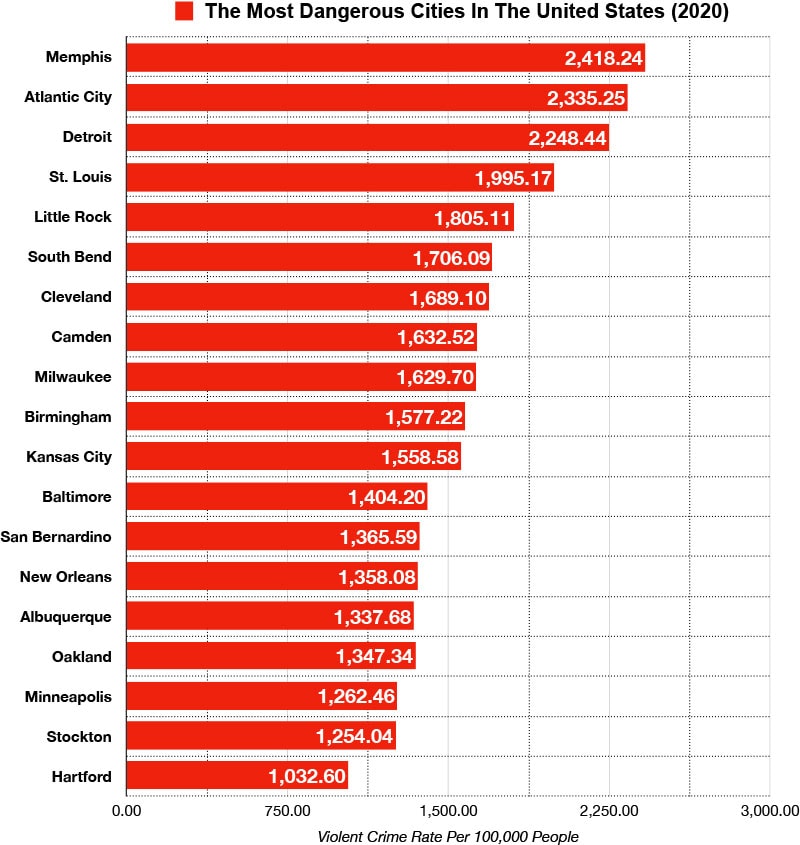 How much has crime increased in Hartford, CT?

Most Dangerous Neighborhoods in Hartford, CT

Hartford’s North End is the city’s most dangerous neighborhood.

The South End around Wethersfield Ave or Franklin Ave are also not great neighborhoods. 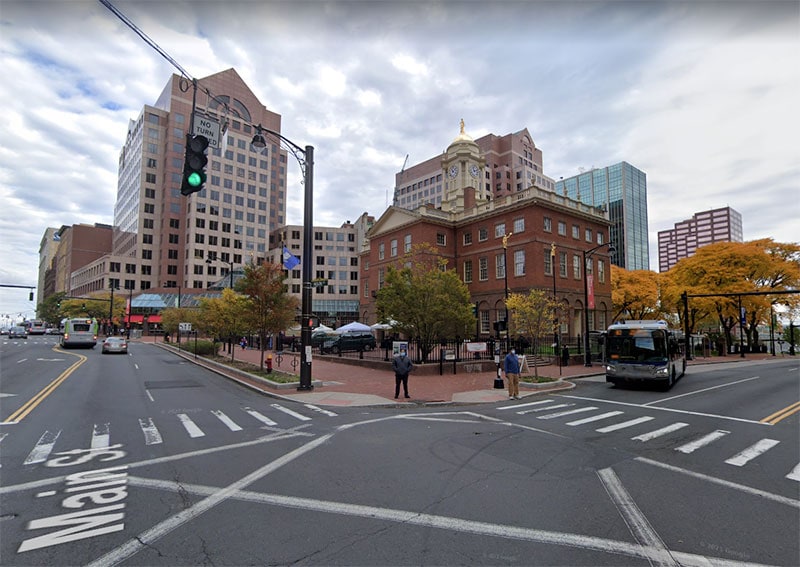 Downtown Hartford is generally a safe area to visit and although Hartford has some difficult areas, downtown is not one of them. There is a good police presence and there are also ambassadors walking around downtown to help secure the area and make it feel safe.

Many residents also mention that they feel very safe in downtown Hartford, but would avoid walking long distances late at night.

Is public transport in Hartford safe?

The public transportation system in Hartford is operated by the CT Public transport and he offers many routes that intertwine throughout the city. CT Transit is generally a safe way to get around the city during commute hours (7 a.m. to 6 p.m.). We advise against using public transit before or after these hours and you should opt for a taxi or ride-sharing service instead.

Is Hartford safe at night?

Hartford is generally safe at night as long as you stay out of problem areas. Be aware that streets and squares that are perfectly safe to visit during the day can be dodgy and dodgy at night. Stay in well-lit, populated areas at night and avoid crossing desolate areas.

Hartford is also not a place where you want to wander aimlessly at night, so save your sights for the day.

What are Hartford residents saying about its safety?

Statistically speaking, Hartford is a slightly dangerous city. In 2021, Hartford has done a phenomenal job of reducing violent crime in the city by almost 40%. However, Hartford still suffers from a very high murder rate that rivals cities like Washington DC and Cincinnati.

Here is a scale to give you an idea of ​​Hartford’s crime rate: