Colorful polka dots dot the pillow Lu Thi Harris used on her bed each night. But four years ago, a stranger invaded her Dallas home and used that pillow as a weapon.

On March 20, 2018, Billy Chemirmir — who spotted Harris at a nearby Walmart — snuffed out the 81-year-old’s life, Dallas County prosecutors argued during his capital murder trial this week.

“This man, right there, is capable of taking the most innocent objects – the things that we lay our children’s heads on at night so they can have dreams…and he’s turned them into instruments of nightmares,” said prosecutor Glen Fitzmartin. to the jurors on Thursday. He was standing a few feet away from where Chemirmir was sitting, watching him and pointing his finger.

The Dallas County jury took just 45 minutes to find Chemirmir guilty of capital murder. Chemirmir might be one of the state’s most prolific serial killers. Police said he preyed on elderly women in senior living communities and private homes in Dallas and Collin counties, stealing their precious jewelry and other valuables.

State District Judge Raquel “Rocky” Jones sentenced Chemirmir to life in prison without the possibility of parole because prosecutors chose not to pursue the death penalty.

Chemirmir showed no visible reaction to the verdict. He stood in front of the judge, arms folded, as she sentenced him.

This was Chemirmir’s second trial for Harris’ death. Chemirmir escaped conviction in November after jurors deadlocked after 11 hours of deliberations over two days. One juror refused to budge, according to notes sent to the judge by that jury.

This week, jurors also heard about the attacks on Mary Brooks on January 30, 2018, at her Dallas condo and Mary Bartel on March 19, 2018, at her apartment in the retirement community. Bartel survived and assisted the police in an investigation which led them to Chemirmir. Brooks’ death was initially thought to be of natural cause, but the medical examiner changed his decision after Chemirmir was arrested and Brooks’ missing jewelry was discovered.

“That’s what we said we would do, and I think it’s appropriate,” Creuzot said.

After that, the remaining 11 counts of capital murder against him in Dallas County will likely be dismissed.

Chemirmir, a Kenyan immigrant with permanent resident status in the United States, did not testify. He claimed he was innocent and said The Dallas Morning News earlier this year he was convinced he would never see the inside of a Texas prison. He patted one of his lawyers, Mark Watson, on the arm on Thursday before being taken back to jail. 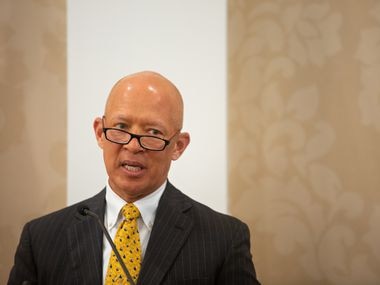 About 25 parents representing about 12 families attended the trial and rejoiced at the verdict, bursting into joy after Chemirmir was ushered out of the courtroom. Creuzot, who helped prosecute the case, sniffled and held back tears as families gathered and prayed.

Jurors declined to comment as they left the courtroom.

“They’ve heard the evidence that we’ve all lived with for years,” Mary Jo Jennings, whose mother, Leah Corken, was killed, told The Tradition-Prestonwood in August 2016. “I hope that’s the first step in healing for all families.

Chemirmir’s lawyers said they have already filed a notice of appeal.

“We didn’t think the state had enough evidence to go beyond a reasonable doubt. Obviously the jury disagreed,” one of Chemirmir’s attorneys, Kobby Warren, said after the hearing ended. “We respect the verdict of the jury. I just don’t agree with that.

The new jury heard much of the same evidence that jurors heard in November.

The case against Chemirmir is circumstantial, prosecutors said. But they believe the totality of the evidence shows that Chemirmir used to suffocate older women and steal their jewelry to resell for a profit.

“This idea that circumstantial evidence equals weak evidence is a thing of movies and books … but it’s not real,” Creuzot told jurors during closing arguments.

Jurors saw CCTV footage of a Walmart on Coit and Arapaho roads on three different days, including the day Harris died.

On that day, March 20, 2018, a video shows Chemirmir and Harris in the store at the same time.

Defense attorneys disputed the video evidence, pointing out that Harris arrived at Walmart nearly 40 minutes before Chemirmir and the footage does not appear to show the two talking to each other. Chemirmir pulled out of the parking lot about two minutes before Harris, Warren pointed out.

Prosecutors sought to prove that Chemirmir had a habit of picking victims at Walmart.

Surveillance footage from another day in March showed Chemirmir standing outside the same Walmart in dark pants, a white shirt and a blue tie with a phone to his ear, staring intently at the parking lot. But a cellphone analyst testified that Chemirmir’s phone showed no recordings of incoming or outgoing calls during the time he wandered around the Walmart, suggesting he was pretending to be on the phone.

Prosecutors also showed Walmart footage from January 30 – the day Mary Brooks was killed. A silver Nissan Altima parked next to Brooks’ car, but the driver never got out. The car, which resembled the one Chemir was driving, drove off when Brooks did. The images never showed a license plate number or the driver.

During questioning by prosecutors, the cell phone analyst said Chemirmir’s records placed him in the Walmart area at the same time. But defense attorneys have tried to question the reliability of cellphone towers and the vast expanse of area they cover.

The defense strategy was also similar to the last trial. Warren and fellow defense attorney Phillip Hayes cross-examined state witnesses more often, but as in the first trial, they made no opening statements and called no witnesses.

“In a criminal case, the most important thing the state has to do is prove to all of you that the person they’re accusing was on the scene… They can’t place him there,” Warren said in his closing arguments, referring to the Harris home.

Much of the two trials were the same. But prosecutors changed the order of witnesses and did not show some evidence that was an important part of the latest trial.

The case they presented this week was largely chronological, placing the witnesses in an order that showed how the investigation unfolded from the attack on Bartel, to the arrest of Chemirmir, to the discovery of the body of Harris, to the new inquest into Brooks’ death.

There were also subtle differences in how evidence was presented to jurors, such as when lead prosecutor Fitzmartin showed a photo of Harris on a projector. The prosecutor then put jewelry on the photo Chemirmir had when he was arrested to show how it matched the items Harris was wearing in the photo.

“All of these things are actually not things. This is proof. This is proof of Billy Chemirmir’s guilt in the death of Lu Thi Harris,” Fitzmartin said forcefully in his closing argument.

Prosecutors did not show jurors the video of Chemirmir’s interview with Dallas and Plano police officers the night of his arrest.

In the hour-long video viewed by the first jury, Chemirmir denied any involvement in the deaths of either of the women. He remained polite throughout the interview and seemed surprised to be accused of murder. He told police he thought he was being questioned for an outstanding warrant for public intoxication.

“I can’t believe it,” Chemirmir said. “Where I come from, our culture, we don’t even think about it. …I didn’t kill anyone.

Prosecutors may not have chosen to play the video at the retrial because it cast doubt in the minds of jurors over Chemirmir’s guilt, said defense attorney and former prosecutor Robbie McClung. not involved in the case.

Defense attorneys attempted to have the video admitted, but to no avail. The rules that lawyers must follow prevent the defense from seizing what is considered to be a self-serving statement, as it deprives the prosecution of the ability to cross-examine the person.

“I think that was probably the fall for them last time. I think that’s what hooked the jury,” McClung said. he didn’t and we got the wrong person?”

“It was a strategic decision,” she said. “The only way for him to get his story out there is to speak up.”

Chemirmir will remain in the Dallas County Jail until after the unscheduled trial for Brooks’ death. He will then likely be transferred to Collin County, where prosecutors also have five indictments against Chemirmir for deaths there.

After Creuzot said last year he would not seek the death penalty, lawmakers and the families of Chemirmir’s alleged victims called on Willis to do so. The Collin County prosecutor’s office declined to comment on the cases.