The number of foreigners living legally in Turkey in 2021 reached an all-time high, according to a Nordic Monitor study. People benefiting from temporary protection form the largest share, while the number of people with residence permits also reached the highest level in history, with a seven-fold increase in the last 10 years. last years. Turkey, which has become a hub for east-west migratory routes, is also hosting a large contingent of undocumented refugees, the exact number of which is unknown.

The countries whose citizens benefited the most from residence permits were Iraq, Turkmenistan, Syria, Iran and Uzbekistan. Azeris are at the top of the list of residence permits for students in Turkey. Again, Azeris, Uzbeks and Russians constitute the majority of foreigners living legally in Turkey with family residence permits.

By far the most preferred city for foreigners with a residence permit is Istanbul, with 684,054 inhabitants. Istanbul is followed by Ankara and Antalya. According to official data, Tunceli (Dersim), a heavily populated city of Alévis, is the place where the fewest foreigners live, barely 48 people. 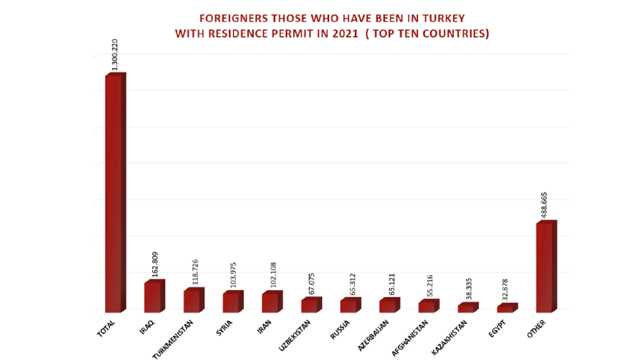 Turkey has not traditionally granted immigrant status to refugees. No matter how long they stay or work in Turkey, very few can become citizens, and only their residence permits are extended. In 2017, Turkey launched a real estate campaign to encourage the sale of homes to foreigners to meet its foreign exchange needs. On top of that, it was also announced that a one-year residence permit would be granted to foreigners who buy a house in Turkey, regardless of the price. Turkish citizenship was promised to foreigners who bought real estate for a million dollars. In 2019, this limit was reduced to $ 250,000, resulting in increased home sales. The opposition severely criticized the government for selling and devaluing the citizenship of the Republic of Turkey.

According to Turkey’s Migration Management Directorate, as of December 23, 2021, the province with the largest number of Syrians was Istanbul, with 533,737 refugees. Gaziantep, a city in the south, followed Istanbul with 460,496. A total of 101,851 Syrians live in Ankara, which has a population of around 5.6 million.

When the number of Syrians is compared to the general population, the highest rate is found in the small southern province of Kilis, where Syrians make up 75.51 percent of the population. The lowest rate is 0.04% in Bayburt, where only 34 Syrians officially live. Syrians registered under temporary protection status represent 4.54% of Turkey’s population, which is 82,280,952. The deterioration of the economy and the pressure of the opposition on the refugees are causing a radical change in the discourse of the government. Turkish President Recep Tayyip Erdoğan has often said in the past that welcoming Syrian refugees to Turkey is a religious duty as well as a matter of conscience. It is no secret that Erdoğan holds an advantage against the European Union by keeping Syrian refugees in Turkey and that this prevents the EU from imposing sanctions for its undemocratic actions against its critics.

However, the changing mood of public opinion shows that Erdoğan will no longer be able to use refugees or irregular migrants at the negotiating table. President Erdoğan in September said for the first time that he was aware of the Turkish public’s unease with the refugees. He reiterated that the country had reinforced its border with Iran with the army, gendarmerie and police and that a wall being erected along the border was about to be completed. Regarding migrants, Erdoğan also said that if the peoples of Europe today live in peace and security, it is thanks to the sacrifices of Turkey, which the opposition saw as a political admission.

According to the data, there are 5,035,094 foreigners legally in Turkey, including Syrians who are under protection and those who have residence permits. There is also a large illegal Afghan and Syrian population in Turkey. Many people from Central Asian countries come to Turkey to work illegally. Although their numbers are small, there are Africans passing through Turkey who have not yet been able to leave the country.