According to official statistics, only 7.1% of workers continue to work from home – as one employment expert said, the practice is turning some young workers into zombies.

Statistics from the United States Bureau of Labor showed that far less than one in 10 workers continued to work from home in June 2022, which equates to approximately 12 million members of the American workforce.

This is a slight drop from 7.4% from the previous month.

And that’s a huge drop from June 2020, when more than a third of workers spent their days logging on from home as COVID raged across the United States, while others – including supermarket workers, police, doctors and nurses – had no choice but to continue going to their places of work.

The percentage of people who continue to work from home applies to anyone who has spent at least part of the previous four weeks working from home.

It includes those who follow a “hybrid” model that also includes in-person work in an office or other workplace.

Battles continue to rage in many workplaces over whether workers should continue working from home indefinitely and which option works best for creativity as well as productivity.

And an expert says the continued work-from-home practices are having a terrible impact on young Americans, who have even taken bizarre forms of protest to make their displeasure felt.

Working from home has been on the decline since the start of the pandemic, with just 7.1% of Americans currently working remotely in June, according to the Bureau of Labor Statistics 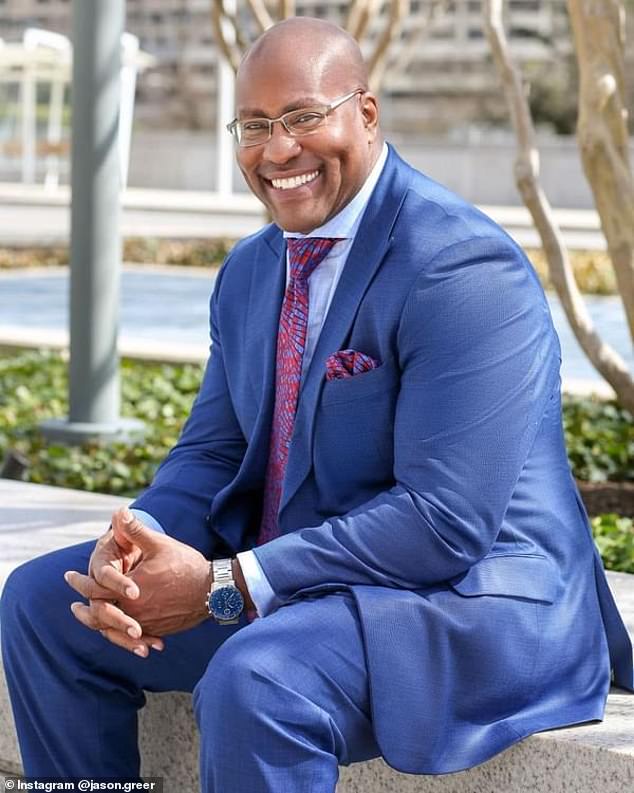 Employee consultant Jason Greer, above, says attitudes have changed on work-from-home policies, especially among the younger generation who fear isolation at work

Jason Greer, 48, founder of Greer Consulting Inc. which helps employers connect with their workers, said while many embraced the option of working from home at the start of the pandemic, attitudes quickly changed.

Greer said employees, especially millennials and Gen Zers, have found long-term working from home disruptive to their young careers, and warned that too much time away from the office will create “zombie workers.” “.

“Last week I saw a case where a group of 35 employees practically quit without telling anyone,” Greer told DailyMail.com, while declining to name their employer.

“It’s not that they walked out, it’s that they were doing the bare minimum but still showing up for virtual meetings.

“We thought it was a salary issue, but they said they were done because they felt isolated working from home.”

Although declining productivity due to poor working conditions is typically used by unions — a practice called slowing down to negotiate better work practices — the 35 employees Greer spoke to had no such plan.

Greer said that because they were working from home, the group of employees felt detached from their co-workers and believed their supervisors didn’t care about them as they worked 15-16 hour shifts.

Rather than complain to their employers face to face, he said the workers simply gave up.

“In the past, we’ve seen these types of frustrated employees walk out physically,” Greer said, “but that’s not going to happen in a virtual meeting.”

He said management was unaware of the issues the employees were facing as they did not voice their decision until a member sent an anonymous message on the messaging app at the workplace. Slack job to let them know about the situation.

Without that message, Greer said, employees would have carried on as they were for as long as they could.

“They’ll log on, get the job done, but their minds will be elsewhere,” Greer said of the zombie workers, “and productivity keeps dropping.”

Greer said the company has now taken steps to try to make its employees feel more connected to their work.

Because talking through virtual meetings and emails can be so impersonal, young workers starting their careers in new workplaces find it difficult to make themselves known in their offices, Greer said.

“This younger generation has a lot of negative stereotypes attached to their work ethic,” Greer said. “They want to prove themselves and be recognized, but it’s difficult when only the interaction with your colleagues is on screen.” 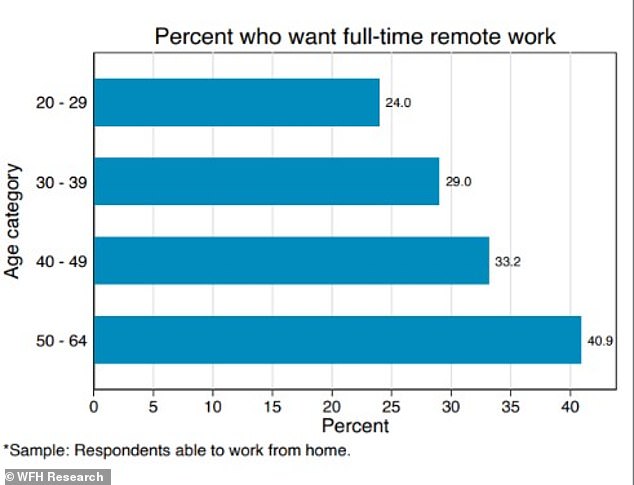 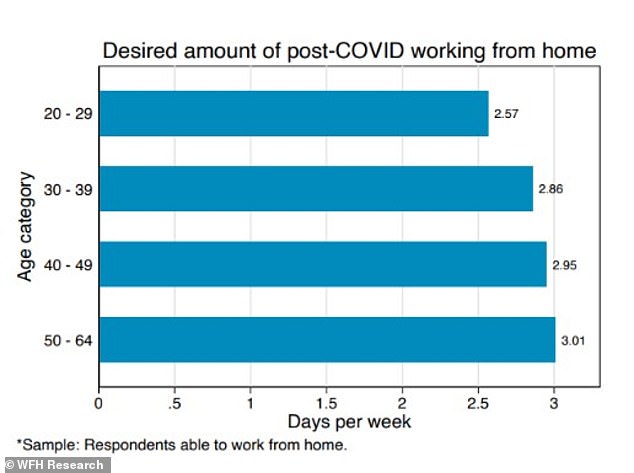 The survey also revealed that the average young employee only wanted 2.5 days of remote work

A July poll from The Survey of Working Arrangement and Attitudes found that workers aged 20 to 29 were the least likely to want to work from home five days a week.

The survey of more than 8,788 American workers found that only 24% of these young workers want to work remotely full-time.

This contrasts with people aged 50-64, where 41% said they wanted to work from home full-time.

The survey also found that the average young employee thought 2.5 days of remote work was ideal.

Two to three days of remote work has become the popular option for workplaces in the United States, with major employers like Twitter and Google creating such hybrid working models.

The hybrid model has become particularly popular in Manhattan, where more than three-quarters of companies have created a balance between working from home and working in the office. 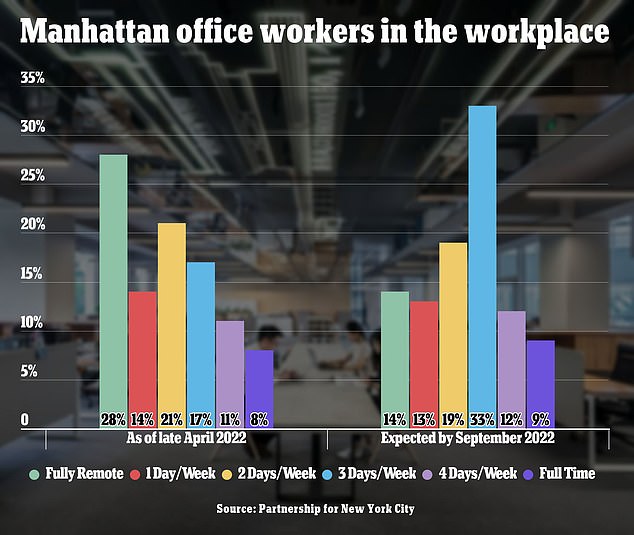 According to a report by the advocacy group Partnership for New York City, at least 28% of employees in Manhattan offices have continued to work remotely. 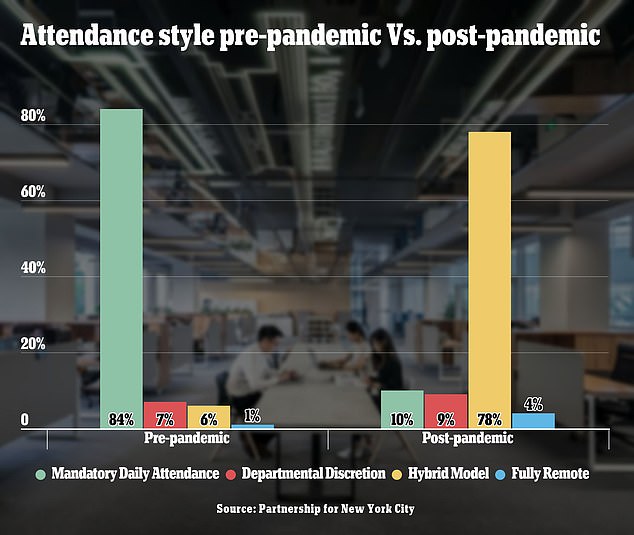 Perhaps the most telling finding is that 78% of workplaces now have a predominantly hybrid model approach – a surprising contrast from just 6% in 2019.

The Partnership for the City of New York advocacy group surveyed 160 top downtown and financial district employers between April 21 and May 4, finding that 78% of workplaces now have a predominantly hybrid model approach – a stark contrast to just 6% in 2019.

The survey also found that at least 28% of Manhattan office workers continued to work entirely remotely in May.

That came to the disappointment of Goldman Sachs CEO David Solomon, who lamented that in-person footfall at his New York office was still only 50-60%.

Greer said that when employers often complain to him that remote work doesn’t allow them to properly track productivity or that it forces managers to work harder to connect with their employees, he tells them to “let go. socket”.

“The workplace is constantly changing, and employers and employees need to find the balance that’s right for them.”