The Maricopa Police Department released crime numbers last month for 2021. The numbers are largely the same as 2020, with a few exceptions.

Violent crimes – homicides, rapes, robberies and aggravated assaults – increased by 34 total crimes. There’s been a murder in town. Aggravated assaults are driving the rise in overall numbers, as they nearly doubled from 58 in 2020 to 106 last year. Robberies went down from nine to six, and rapes were cut in half, from six to three. 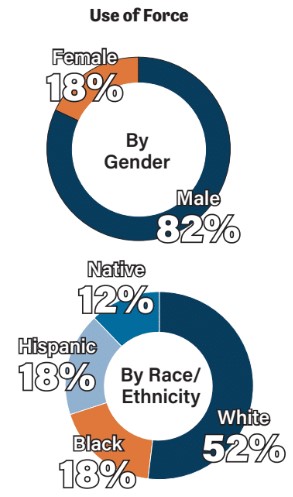 There was a dramatic decrease in property crime last year. Defined as commercial or residential burglary, theft, theft from a vehicle and stolen vehicles, these crimes fell by 140 in total.

With people returning to work after the COVID-19 pandemic shutdowns, traffic violations have increased. Collisions and traffic stops each increased by almost 30%.

Crimes are all reported using the Universal Crime Reporting (UCR) statistical method. The department also compiled data using the National Incident Reporting System (NIBRS). These figures will be available later this year. 2021 was the last year the department will use the outdated DUC method. 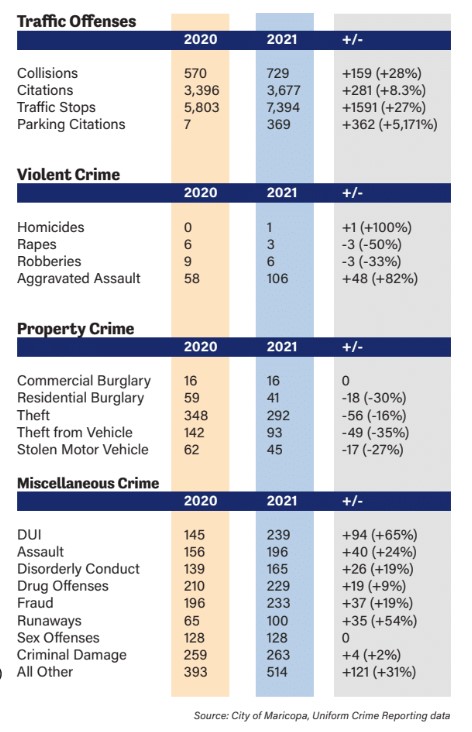 There were 17 “use of force” incidents in 2021, down more than 25% from the total of 24 in 2020. He defined the use of force as any time an officer uses a method other than verbal compliance to gain cooperation, such as using a Taser, withdrawal, or coercion.

The demographics of those on whom force was used showed that 82% of the time force was used against men and 18% against women. The racial breakdown was as follows: White 52%; Black 18%; Hispanics 18%; Native American 12%; breed unknown 5%; and Asian and Pacific Islanders, both at 0%.

This story was first published in the February edition of InMaricopa magazine.